Cycling tour by Lake Mjøsa from Eidsvoll  to Lillehammer 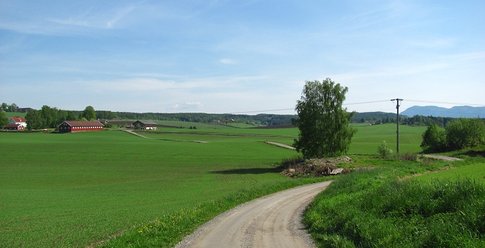 From Sunde; the administrative center of Eidsvoll you cycle up a few kilometres uphill before turning left following rv. 177 east of Vorma river and through farmland. At Minnesund, follow the signposted cycle route by Lake Mjøsa to Tangen.

From Tangen the trip will mainly be on gravel and paved roads through forest. When coming out of the few hills in the woods, you reach the rolling countryside of Stange and the coastline of Lake Mjøsa.

It is just as described in the saga - a rolling, lush cultural landscape lying before you. There are also some large old farms and manor houses on this westward facing slope towards Mjøsa. Huseby Farm is described as a royal residence in the Old Norse Kings’ Sagas. If you are tempted by a swim in Lake Mjøsa, then Gillundstranda is to your left. A break at one of the farm cafes serving tasty local specialities is recommended.

In the cultural landscape you can find old grave hills and idyllic country roads. Some of the most beautiful estates are located in this region. Stange Church is one of the oldest medieval churches in Norway, and worth a visit. (Open for guided visits in summer).

At the traditional Fjetre farm you are served homemade specialties, and the farm has license to produce Norwegian Aquavit matured from barrels. The farm offers 6 rooms sleeping a total of 12 people available in a newly restored building from the 1700s. You can also enjoy traditional dishes in the farm pub in the old storehouse.

This historic distillery produces 25,000 litres of potato-based spirit. The spirit is made into the flavoured Norwegian national spirit of aquavit. The guided tour gives an introduction to the process, and you will also be allowed through the locked doors to the aquavit storage vault, with its rows of oak casks. After the tour, you can get a taste of the various aquavits of the distillery, including the “Pilgrim aquavit”.

The bike tour continues towards Hamar. At Stange Bridge, there is a fine view towards the Åkersvika nature reserve and the Hamar Olympic Hall known as the Viking Ship. There have also been several finds in this area that show it was an important centre of power in the Viking Age from the 6th century until around 1000 AD.  Continue north along Lake Mjøsa passing the Hamar’s popular recreational areas and beaches.

Hamar was an important religious and political centre in Norway, organized around the cathedral and the bishop's manor. The bishop's seat was established in 1152, and the medieval town Hamarkaupangen was one of the 4-5 most important towns in Norway for about 400 years.  The ruins of Hamar´s old cathedral lies at the edge of the Domkirkeodden headland. The location at the highest point of the promontory made the cathedral a powerful landmark, visible from many miles away to anyone sailing down Mjøsa Lake.

At Domkirkeodden you can experience the medieval Hamar, an open air museum, exhibitions, relax to the sound of Gregorian chants in Hamar Cathedral,  hear about how medieval monks used plants in cooking and for medicinal use the country’s biggest organic herb garden, inspired by the Herb Garden of St. Olav monastery.

From the ruins of the Cathedral the trail leads you further north along Lake Mjøsa to the city center in Brumunddal.

Kvarstad Gård is about 7 kilometers from Brumunddal center. The farm is located in a rural, idyllic area on a hill, with history to be traced back to the Viking period. The farm is in full operation, and it also produces specialities like chocolate truffles and ice cream. The farm offers 12 rooms sleeping a total of 29 people

Wood Hotel in Brumunddal, is situated close to the city centre. Stay at the world's tallest timber building.

Continue north on gravel roads towards Moelv. Two kilometers from Moelv you will pass Ringsaker Church and Mjøskastellet Citadel; the stone basilica was dedicated to Saint Olav. The Mjøskastellet citadel is said to have been built by King Håkon Håkonsson in 1234, and it was strategically located here at the point where Lake Mjøsa is narrowest.

From Moelv to Lillehammer the first part is on asphalt on rv 213 before you turn right towards Lake Mjøsa and follow the gravel road through forest.

After a few kilometers you will see the St Olav's spring, which is a source of constantly open and running water, that was one of the holy springs that people went to in the Middle Ages to be cured of various illnesses. The springs were often dedicated to a saint, and this one was dedicated to Saint Olav. After a climb you will reach fv. 213 and the last 6 kilometers to Lillehammer will be on asphalt. 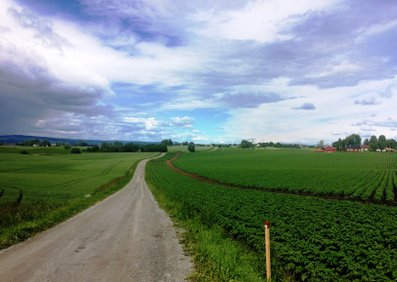 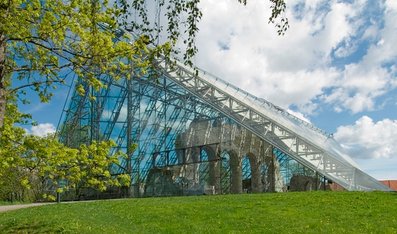 The Glass Cathedral at Domkirkeodden. 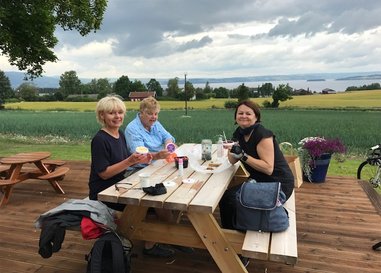